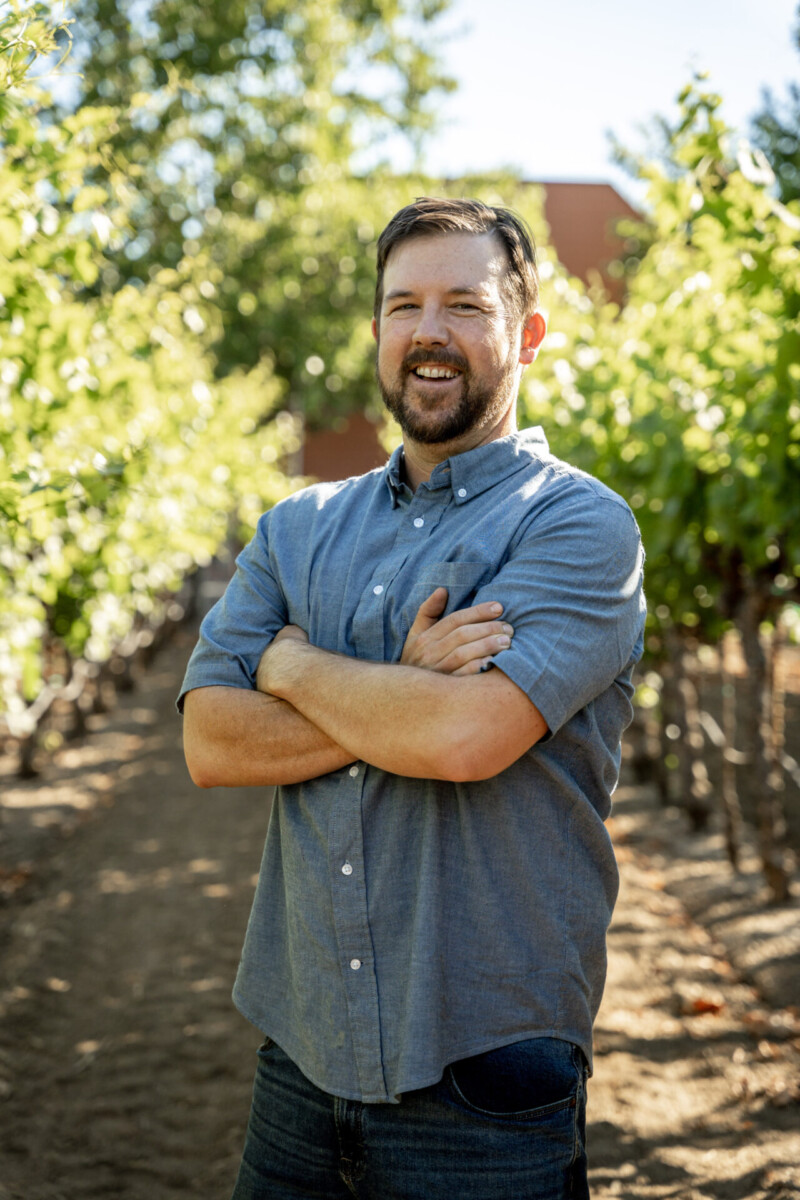 At the tender age of six, Andrew learned which end of the pitchfork to hold and now, as Winemaker, he hasn’t forgotten. He studied Enology and Viticulture at Santa Rosa J.C. and U.C. Davis Extension and is a 2002 graduate in Philosophy from the University of Redlands.

He has traveled to other winegrowing regions of the world including France, Germany, Austria, Italy, Croatia, Spain, Australia, New Zealand and South Africa. To say his palate is international is an understatement.

He enjoys time with his children (Lena, Drew, Ruby) and wife April, cooking, Crossfit workouts and consulting with Doug about squirrels and baseball. He is justifiably proud of his fifth generation presence in Dry Creek Valley injecting a healthy dose of enthusiasm and passion for wine and grapes. 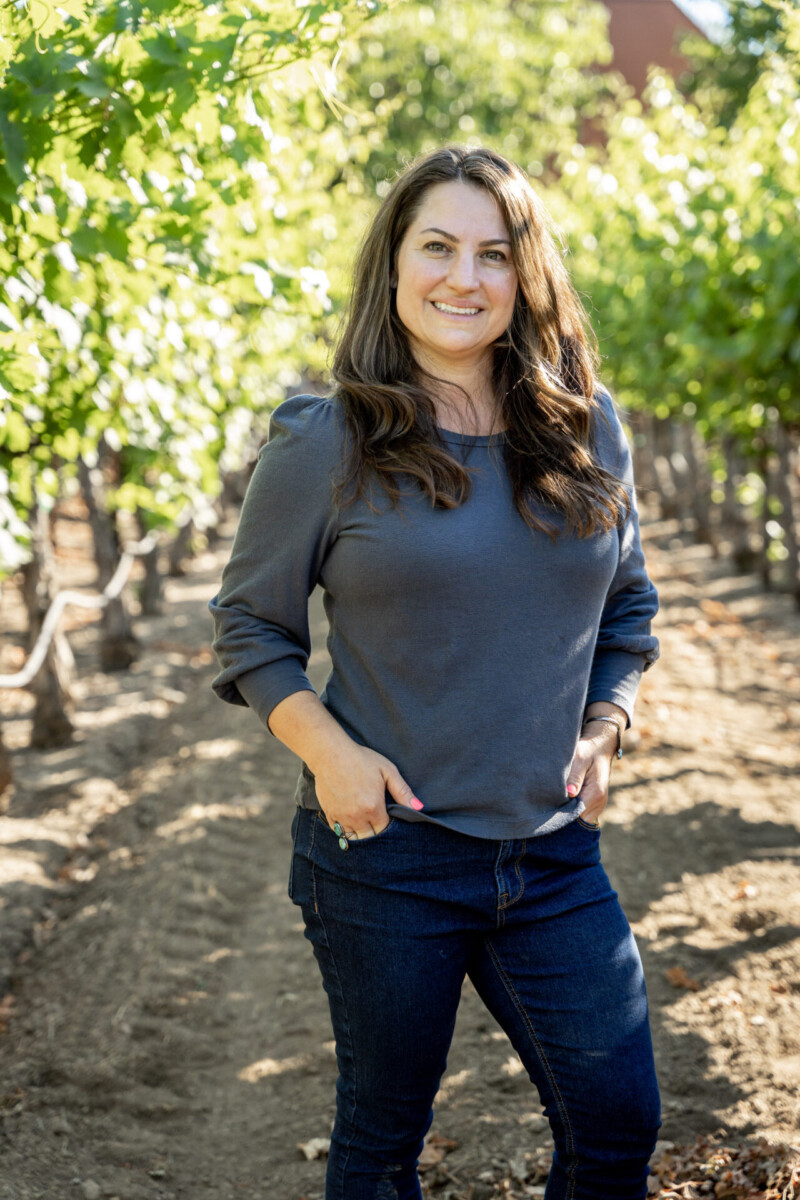 Viticulturalist (and so much more!)

April Nalle is a winegrowing enthusiast with a passion for sustainable agriculture. After working harvests in California, she decided to take her love of farming to the next level (and continent) by earning a Masters of Viticulture from the University of Adelaide in Australia. After receiving her degree, she went on to work for a vineyard management company in South Australia.

In 2013 she came home to work as a grower relations specialist in the Central Valley eventually making her way to Sonoma County where her true dedication for quality grape growing lies. Today, Andrew and April continue to tend the Nalle estate old vine vineyards with love and sustainable practices, their children, Lena Drew, and Ruby always by their side.

Doug’s first job in the wine industry was in 1973 as a cellar worker for Souverain. Everyone told Doug, “You have to know someone to get a winery job.” Apparently not! Doug crushed the first grapes through the facility in Geyserville but wasn’t asked to do the blessing since Father O’Whatshisname was present. Clearly smitten with the wine bug, Doug enrolled at Santa Rosa J.C. (His B.A. in History from the University of Redlands was not quite winemaking oriented. Who knew?) He took a winemaking class from Dick Arrowood and grape growing classes from Rich Thomas. Next, it was chemistry at Sonoma State U. Finally, he squeezed his way into the enology graduate program at U.C. Davis and earned a Masters degree in 1979 with Professor Roger Boulton as his research advisor. While at Davis, he worked harvests for Jordan and Arroyo Sonoma and made award winning amateur wines with buddy, Mike Hin. Doug considers Mike his mentor and the best winemaker he’s ever known. Mike’s studies on Pinot Noir, both viticultural and enological, were hugely instrumental in paving the way to the varietal’s North American success.

After graduating from UCD, Doug worked for Balverne Winery and Vineyards from 1979 to 1983, where he and co-winemaker, John Kongsgaard, produced numerous estate bottled wines. In 1984, Doug was hired to build a state-of-the art Dry Creek Valley winery for San Francisco venture capitalist Bill Hambrecht. After one harvest, the project was scuttled, which, in turn, spawned a Nalle-Hambrecht partnership and the Nalle label. The partnership ended amicably in 1990 at which point Doug and his wife, Lee, (see below) became equal partners.

In 1986, public relations expert, Jan Mettler, introduced Doug to Henry and Holly Wendt of Quivira Vineyards. What began as a consulting role, turned into full time winery design and winemaking at Quivira. In 1987, Doug moved his equipment from the red barn at 1040 Lytton Springs Road to Quivira which allowed Fred Peterson, Hambrecht’s vineyard manager, to start Peterson Winery. In 1990, Doug left Quivira to focus on his Nalle brand and build an eccentric above-ground cave aka Nalle Winery.

These days, Doug sits on his deck, drinking Zinfandel. Occasionally, words of advice are uttered to no one in particular. 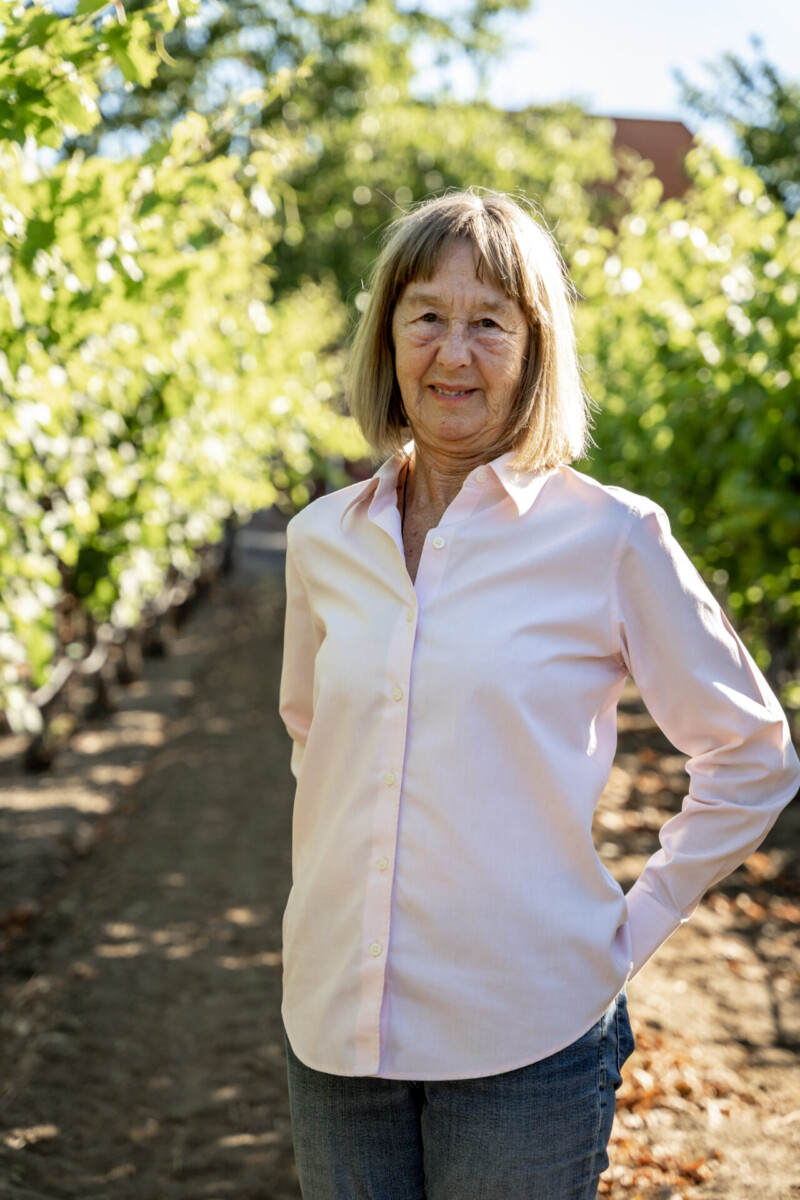 Lee met Doug on a lazy, warm spring Sunday in 1974. They were married that same year and their relationship is now over 45 years strong. She is the mother of their two sons, Andrew and Sam, a cancer drug discovery and development scientist in San Francisco.

Lee graduated in Anthropology, Phi Beta Kappa, from U.C. Berkeley in 1971 and U.C. San Francisco’s Nursing program in 1974. She worked as a Nurse Practitioner and taught child birth classes until her sons and husband demanded all of her time. She is the consummate utility player for the family and winery, e.g., quality control sorting at the crusher (“no pink, no raisins, no rot”), head cook (her meatloaf and crème caramel are almost world famous), and she still takes time to write “thank yous” in calligraphy.

Her family roots go back to the 1890s in Dry Creek Valley. Her great grandfather, John Henderlong, ran sheep on a ranch now underwater at Lake Sonoma. In 1917, her grandparents, Fred and Ruby Henderlong, bought the property on which Lee, Doug, Andrew and April live and operate Nalle Winery.

She and Doug have traveled to many winegrowing areas of the world including New Zealand, Australia, South Africa, South America and Europe. Her “Don’t bother”, “It’s OK”, and “I’ll Have Some More, Please” wine critiques have worked well for four decades. If only wines smelled and tasted like coffee.

“By far, the best tasting experience my fiancé and I ever had… We plan on going back every time we’re Napa/Sonoma. I have more respect for the Nalle’s for staying true to their vision than I do for most people. Just amazing.”

Be the first to learn about new releases, special events and more!

CLICK HERE TO RESERVE YOUR TASTING OUTSIDE IN THE VINEYARD!
toggle
Toogle Down