What To Drink on Thanksgiving

Zinfandels that won’t overwhelm your turkey. 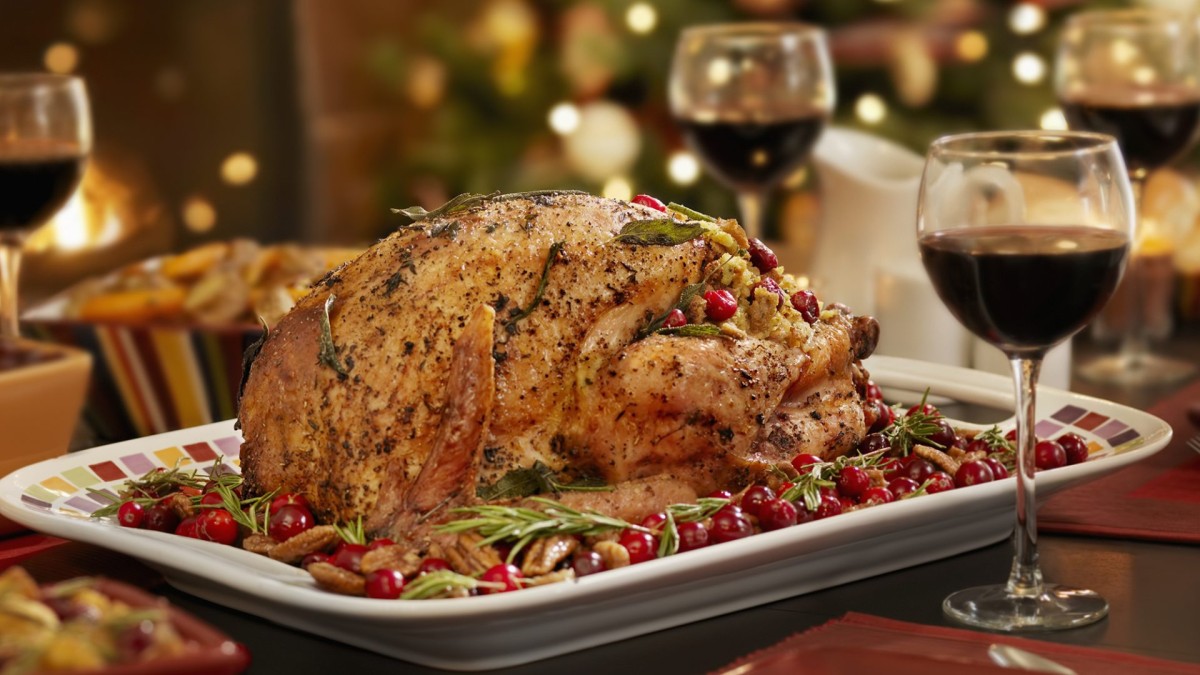 Produced on these shores for nearly two centuries, zinfandel has long been considered the all-American wine and the ideal choice for those looking to drink domestically on Thanksgiving. Some oenophiles even assumed that the zinfandel grape was indigenous to the United States. Seven years ago, researchers proved that it is actually Croatian in origin; what we (mercifully) renamed zinfandel is an old varietal native to the Dalmatian coast called crljenak kastelanski. However, this discovery has done nothing to erode the link between zinfandel and the most gluttonous of American holidays. But not all zinfandels are up to the task of washing down the turkey. While zinfandels are by nature rich, spicy, and mouth-filling, the market is flooded these days with monster-truck zins—dense, high-alcohol wines that, whatever virtues they may possess, tend to crush any food that gets in their way. Happily, there are still some producers who believe that table manners matter and who make zinfandels in a more genteel style—wines that will flatter the bird next Thursday rather than flatten it.

Zinfandel arrived in the United States in the 1820s and was first cultivated along the East Coast. It was brought to California in the 1850s and by the late 19th century was the state’s most widely planted grape. It was very popular with home winemakers during Prohibition, but its reputation declined in the years following repeal. Wineries like Souverain and Louis M. Martini turned out good zinfandels, but the grape was generally relegated to workhorse status. That began to change in the mid-to-late 1960s, when vintners like Joseph Swan and Bob Trinchero started crafting ambitious, age-worthy zinfandels. But it is Ridge Vineyards, founded in 1962, that gets most of the credit for putting a serious face on the grape. Ridge’s single-vineyard zinfandels, usually blended with small amounts of petite sirah and carignane, were complex, elegant wines that could last for years and improve with cellaring. They were often described as “Bordeaux-like,” which was a testament to their path-breaking quality.

Despite the sensational wines produced by Ridge and a few other estates, zinfandel’s fortunes continued to ebb and flow. Since the early 1990s, however, zinfandel has soared in popularity, to the point that there was even an effort a few years ago to designate it California’s official grape. (Gov. Arnold Schwarzenegger vetoed the measure—maybe the Austrian native prefers grüner veltliner?) But the last two decades have also seen the ascendancy of a particular style of zin—brawny, Schwarzenegger-like wines that are very heavy on the alcohol. Nowadays, zinfandels in excess of 15 percent alcohol (an amount that can leave even seasoned drinkers in need of Tylenol in the morning) are commonplace.

In fact, zinfandel has become so synonymous with “high-octane” that it is now Exhibit A for a growing chorus of writers, sommeliers, retailers, and vintners concerned about increased potency in wines. With zinfandel, however, the alcohol issue is more complicated than is often acknowledged. The zinfandel grape is a thin-skinned one that tends to ripen easily if somewhat unevenly; riper grapes contain more sugar, which makes for more alcohol in the final product (the fermentation process converts sugar to alcohol). According to Ridge’s Paul Draper, who is considered by many people (including yours truly) to be the greatest vintner this country has produced, zinfandel grapes usually can’t reach full physiological maturity at less than 14 percent potential alcohol; Draper says that only if the grapevines are truly old—at least 60 years of age—can maturity be achieved below that threshold. The challenge with zinfandel, he explains, is that it doesn’t take much to push the alcohol into the eyebrow-singeing range; a few hot days just before or during the harvest can send the sugar levels soaring. Draper says it is possible for a zinfandel to tip the scale at 15 percent alcohol and still be balanced, but he thinks that the ripeness of the fruit can overwhelm the influence of the vineyard, which is why he prefers his wines to be under that number.

For other producers, however, maximum ripeness is the aim; they want their zinfandels to come in above 15 or even 16 percent alcohol. It is a stylistic preference for many of them, but there are also commercial considerations: Heady zinfandels are the ones that seem to score best with critics, and the wine-buying public appears to really like them, too. A study released last year by Zinfandel Advocates & Producers, an organization that represents some 300 wineries, found that just 10 percent of consumers surveyed felt that zins were too ripe and alcoholic. The fact that demand for zinfandel remains strong clearly suggests that elevated alcohol levels are not an impediment to sales and may even be part of the attraction.

But at the risk of sounding like the persnickety, Eurocentric oenophile that I am, the problem with these steroidal zins is that they are tough to pair with any dish this side of woolly mammoth. There just aren’t many foods that marry well with jammy, low-acid wines (and it doesn’t help that many such zins are also so excessively oaky that they can leave your tongue feeling like a lathe). Fortunately, there are still zinfandels being made with an eye to dinner, Thanksgiving or otherwise.

I long ago owned up to my fondness for Ridge, and the trio of wines that I tasted this week did nothing to dull my enthusiasm. The excellent 2006 Ridge Vineyards Sonoma County Three Valleys ($22) is an impeccably proportioned wine redolent of raspberries, leather, and licorice, and it is a good value, too. The 2006 Ridge Vineyards Geyserville ($35) sports a terrific bouquet of crushed berries, flowers, cedar, and chocolate. It is a full-bodied, energetic, but also very suave wine with enough structure to carry it well into the next decade. The 2006 Ridge Vineyards Lytton Springs ($35) is delicious; aromas of black currants and roasted herbs float up from the glass, leading to a wine of almost Zen-like poise that exudes completeness.

Mike Dashe worked as Paul Draper’s assistant before starting his own eponymous winery in 1996, and the Draper influence is unmistakable in the restrained opulence of his zinfandels. The 2007 Dashe Cellars Dry Creek Valley Zinfandel ($24) is a beautifully balanced wine, its lavish fruit parried by good acidity and ripe, perfectly integrated tannins. The 2006 Dashe Cellars Todd Brothers Ranch Zinfandel ($32) is big and lusty but with just enough acidity to avoid sliding into flamboyance. I was more impressed by the 2006 Dashe Cellars Louvau Vineyard Zinfandel ($32); a bouquet brimming with blackberries, cherries, tobacco, cedar, and leather gives way to a graceful wine that showcases zinfandel in all its palate-staining glory.

Like Ridge, Chateau Montelena is an iconic California winery; unlike Ridge, Montelena’s zinfandel has always been overshadowed by its cabernet and chardonnay. But the 2005 Chateau Montelena—The Montelena Estate Zinfandel ($30) is an outstanding wine, with succulent but nicely harnessed fruit, fine structure and minerality, and a long, satisfying finish. Green & Red Vineyard is a Napa winery that has long been recognized for the quality of its zinfandels. The 2005 Green & Red Vineyard Tip Top Vineyard Zinfandel ($28) is a superb, mineral-inflected effort (with a great menthol note, too) that seems to have a foot in both the New World and the Old, combining California brightness with continental restraint. The 2006 Green & Red Vineyard Chiles Mill Vineyard Zinfandel ($25) is equally winning, although it moves at a slightly different tempo. It is a peppery, creamy, richly flavored wine with strapping tannins, but it flows harmoniously.

Celebrity wines are popping up everywhere; the 2005 Rubicon Estate Edizione PenninoZinfandel ($40) is one that is actually worth drinking. Francis Ford Coppola owns Rubicon and consistently turns out classically robust, peppery zinfandels. The ‘05 is packed with lush, briary fruit, but there is ample acidity to keep the wine from becoming pudgy, and it finishes with big, ripe tannins and a nice lick of chocolate. Sonoma’s Nalle Winery, by contrast, has no claim to celebrityhood; it hardly even gets mentioned in the wine press these days. Nalle makes what have become truly anomalous zinfandels, ones that trade on subtlety and finesse rather than power. The 2006 Nalle Winery Zinfandel ($32) has the light complexion of a red Burgundy and a gentle, inviting nose of cherries, flowers, cloves, and black pepper. The first sip will not impress; the wine will seem lean and lacking (especially next to other zinfandels). But wash it around your mouth a bit—this is a charming zinfandel, with plenty of concentration and flavor. It is a wine of hidden depths and a timely reminder that not all zinfandels need to smack you across the head to make an impression. The 2005 version, which goes for the same price, is equally lovely.