SPECIAL TO THE CHRONICLE 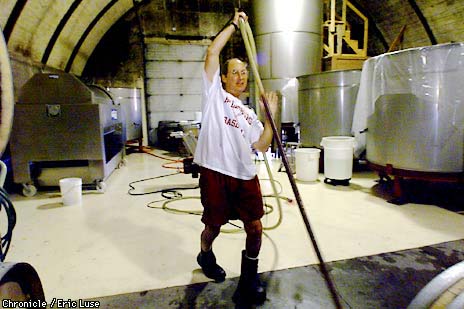 For Doug and Lee Nalle, running the Nalle Winery in Sonoma’s Dry Creek Valley is all in the family.

The two co-own and operate the Healdsburg winery with the help of their two sons, Andy, 22, and Sam, 18, and the “occasional volunteer who comes around and helps us,” says Doug Nalle, who is also the winemaker.

This is no button-down, formal operation. Nalle typically dresses for work in what he calls “Nalle Zin” attire — a baseball cap and a Nalle Winery sweatshirt. Inside the winery, he put up a basketball hoop and a batting cage for spur-of-the-moment play.

The Nalles make 2,300 cases of wine a year. Only one wine — Zinfandel — merits their attention, though they also make tiny amounts of Pinot Noir and Riesling.

There are no written contracts with the growers from whom they buy grapes on postage-stamp-size parcels around Dry Creek Valley. “Instead we use the old-fashioned handshake. People trust us, we trust them,” Nalle says.

The winery, which has existed since 1984, and the family’s home sits on land belonging to Lee Nalle’s family; her cousin runs the vineyard; and the Nalles buy some of their Zinfandel grapes from Lee’s mother, who owns property on which stubby, 73-year-old Zinfandel vines grow. “We’re squatters on my mother-in-law’s property,” Doug Nalle says, laughing.

The 2,400-square-foot winery building is shaped like a Quonset hut. It is covered with three feet of dirt on top, and rosemary plants cover the dirt. The arch’s interior is made of shotcrete, a form of concrete with extra rock in it.

The couple had the idea to build a sort of above-ground cave in 1990, to conserve energy.

It moderates the outside temperatures and creates a natural environment and a nice working atmosphere good for everything in the winemaking process except the storage of cardboard case boxes. They need no air conditioning or heat year-round.

“I started sorting fruit in the ’70s when no one else was doing it,” he says. “Smaller wineries were doing it before larger ones because it was more feasible to do so in small amounts.”

For the Nalles, wine is a hand-crafted product. “We go out in the vineyard and help pick and sort since Zinfandel is such an odd duck and doesn’t ripen evenly,” Nalle says. “The more you can sort out, the better.”

Nalle Zinfandel is fermented in steel tanks with open tops rather than closed ones, a practice often associated with high-quality, small-batch production of red wine.

“Zinfandel ripens unevenly, so you’re always going to have raisins with high sugar, which means high alcohol,” Nalle says. “The open top helps you to lose a little of the alcohol.”

Nalle Zinfandel has an alcohol content of just below 14 percent, higher than almost all wines but lower than most Zinfandels.

The wine is aged 11 months in French oak barrels, sits in the bottle for six months, and is released in the spring, 18 months after harvest.

The Nalles’ wine, with a suggested retail price of $25 for a 750-milliliter standard bottle, is described by winetoday.com, among others, as an “elegant” Zinfandel, distinct from the high-alcohol, effusively fruity Zins that also are made in Napa and Sonoma these days.

“My goal is a balance of fruit and alcohol so that the wine is good now and perhaps 10 years out will still be good,” Nalle says.

Keeping the operation small is important, he says. “It’s a complete hands-on business from cradle to grave. The good news is as much freedom as possible,

from decision-making to working schedules. The bad news is there’s a minimal support system. There is zero tolerance for mistakes in quality. But I like the pressure of having to perform on a small scale.”

Would he consider growing into a bigger operation? Not only is there a limited supply of high-quality grapes to be had these days, but Nalle thinks things are good just the way they are.

“I’d want someone to tell me why we should get big if we’re controlling our quality, which we are, and our profit margins are good,” Nalle says.

The Nalles display a sense of humor and reject the pretension associated with high-end wines. Side labels on their bottles, designed by Sonoma County artist Bob Johnson, speak of “The Zin of Winemaking” and certain “Zin-Biotic Relationships” and caution, “Let He Who is Without Zin Pull the First Cork.”

“Wine shouldn’t be pretentious, but it doesn’t mean you can’t be serious about quality,” Nalle says. “We believe in cutting the pretentiousness out but giving people a serious, high-quality wine.”